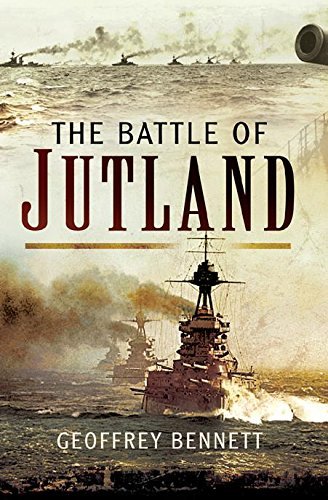 Book Review of
The Battle of Jutland

Author: Geoffrey Bennett
Genre(s): History  Nonfiction  WWI
Buy the Book
We are a participant in the Amazon Services LLC Associates Program, an affiliate advertising program designed to provide a means for us to earn fees by linking to Amazon.com and affiliated sites.
Skip to the book review
Publisher Summary:

The Battle of Jutland: At the end of May 1916, a chance encounter with Admiral Hipper’s battlecruisers has enabled Beatty to lead the German Battle Fleet into the jaws of Jellicoe’s greatly superior force, but darkness had allowed Admiral Scheer to extricate his ships from a potentially disastrous situation. Though inconclusive, at the Battle of Jutland the German Fleet suffered so much damage that it made no further attempt to challenge the Grand Fleet, and the British blockade remained unbroken. Captain Bennett has used sources previously unavailable to historians in his reconstruction of this controversial battle, including the papers of Vice-Admiral Harper explaining why his official record of the battle was not published until 1927, and the secret “Naval Staff Appreciation” of 1922 whose criticism were so scathing that it was never issued to the Fleet. Also included are numerous battle plans, photographs and an introduction by Bennett’s son. 2006 is the 90th anniversary of the battle.

There is so little written about World War I that when I saw The Battle of Jutland, I really wanted to read it. I will say that it taught me a lot about the German and British navy during World War I. I didn’t know much about the navy, but I learned a lot, especially that it was very dangerous because of how the ships were built back then.

Yet, it was not the best written book. I think that this is an important part of history, so everyone should read about it. If you aren’t a reader of history, this would not be the best book to start with. If you love history, then I think this book is worthy of reading, but there may be better books out there about this battle and the navy during World War I.