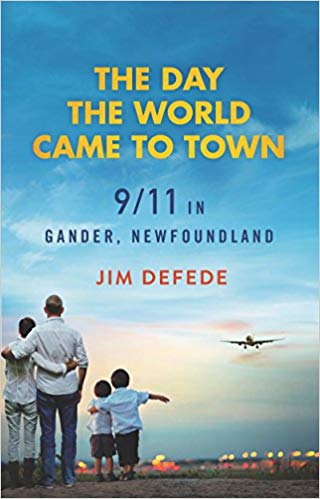 Book Review of
The Day the World Came To Town

Author: Jim Defede
Genre(s): 9/11
Buy the Book Buy the eBook
We are a participant in the Amazon Services LLC Associates Program, an affiliate advertising program designed to provide a means for us to earn fees by linking to Amazon.com and affiliated sites.
Skip to the book review
Publisher Summary:

When 38 jetliners bound for the United States were forced to land at Gander International Airport in Canada by the closing of U.S. airspace on September 11, the population of this small town on Newfoundland Island swelled from 10,300 to nearly 17,000. The citizens of Gander met the stranded passengers with an overwhelming display of friendship and goodwill.

As the passengers stepped from the airplanes, exhausted, hungry and distraught after being held on board for nearly 24 hours while security checked all of the baggage, they were greeted with a feast prepared by the townspeople. Local bus drivers who had been on strike came off the picket lines to transport the passengers to the various shelters set up in local schools and churches. Linens and toiletries were bought and donated. A middle school provided showers, as well as access to computers, email, and televisions, allowing the passengers to stay in touch with family and follow the news.

Over the course of those four days, many of the passengers developed friendships with Gander residents that they expect to last a lifetime. As a show of thanks, scholarship funds for the children of Gander have been formed and donations have been made to provide new computers for the schools. This book recounts the inspiring story of the residents of Gander, Canada, whose acts of kindness have touched the lives of thousands of people and been an example of humanity and goodwill.

The Day The World Came To Town is a book about 9/11 but also about so much more.

On September 11, when the U.S. closed it’s airspace, thirty eight jetliners were forced to land in Gander, Newfoundland. Gander was a small town of around ten thousand people, and in less than twenty four hours, it almost doubled in size.

The town banded together and gave those stranded passengers a welcome like no other. In the midst of a horrific disaster, Gander, Newfoundland stepped up and showed what ordinary people can do to make a difference.

The Day The World Came To Town shares in inspiring story in the midst of a terrible tragedy. It reminds me a little bit of the book Once Upon A Town. Small towns, full of everyday people, can make a big impact.