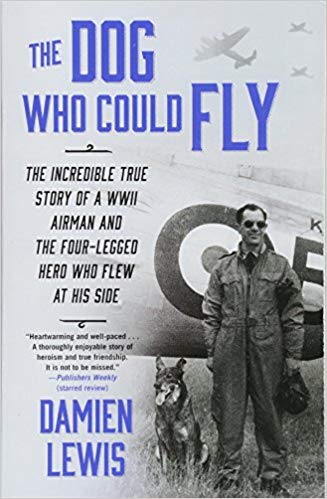 Book Review of
The Dog Who Could Fly

Author: Damien Lewis
Genre(s): Biographies  Biographies & Memoirs  History  Nonfiction  WWII
Buy the Book Buy the eBook
We are a participant in the Amazon Services LLC Associates Program, an affiliate advertising program designed to provide a means for us to earn fees by linking to Amazon.com and affiliated sites.
Skip to the book review
Publisher Summary:

In the winter of 1939 in the cold snow of no-man’s-land, two loners met and began an extraordinary journey that would turn them into lifelong friends. One was an orphaned puppy, abandoned by his owners as they fled Nazi forces. The other was a different kind of lost soul—a Czech airman bound for the Royal Air Force and the country that he would come to call home.

Airman Robert Bozdech stumbled across the tiny German shepherd—whom he named Ant—after being shot down on a daring mission over enemy lines. Unable to desert the puppy, Robert hid Ant inside his jacket as he escaped. In the months that followed, the pair would save each other’s lives countless times as they flew together with RAF Bomber Command. Finally grounded after being injured on a flight mission, Ant refused to abandon his duty, waiting patiently beside the runway for his master’s return from every sortie, and refusing food and sleep until they were reunited. By the end of the war, Robert and Ant had become true war heroes, and Ant was justly awarded the Dickin Medal, the “Animal VC.”

With beautiful vintage black-and-white photos of Robert and Ant, The Dog Who Could Fly is a deeply moving story of loyalty in the face of adversity and the unshakable bond between a man and his best friend.

The Dog Who Could Fly was another WWII book that I really enjoyed reading. I think that it was because it was a different view on WWII as Robert was from the Czech Republic and not from one of the major countries in WWII. It also unique in his experience of trying to keep a dog while he was in the air force. I learned a lot about the different people who fought in World War II, and the bond that was formed between airmen who were originally from the same country.

I also loved it because it was a sweet animal story. I love animal stories, especially when it is about a dog. My family had a German Sheppard for many years, which gave me a connection to the German Shepherd in this story. I was so sad for the dog in some parts, but in others I couldn’t help but cheer him on.

I recommend this book to anyone who loves animal stories, war stories, and stories that are unique. I love to seek these books out and am so glad that I found this one to enjoy.