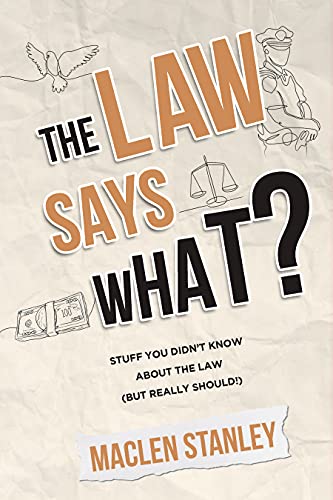 Book Review of
The Law Says What?

Author: Maclen Stanley
Genre(s): Nonfiction  True Crime
Buy the Book Buy the eBook
We are a participant in the Amazon Services LLC Associates Program, an affiliate advertising program designed to provide a means for us to earn fees by linking to Amazon.com and affiliated sites.
Skip to the book review
Publisher Summary:

The Law Says What? offers a crash course on some of the most bizarre, infuriating, and vitally important legal topics of today. Using real-world cases as a guide, you’ll explore laws that affect your everyday life and analyze the rationales behind the ones that might make your head spin. Your mind will be blown and you’ll even find yourself laughing as you learn about the weird quirks of criminal law, civil law, contract law, property law, tort law, international law, and courtroom procedure.

I was offered a free copy of “The Law Says What?” from the publishing company, TCK Publishing. I decided that it sounded like a book I might enjoy, and I am always interested in legal stuff since my minor is in Criminal Justice.

I am so glad I got this book because it was a good read.

I was afraid it would get political or share personal opinions on what is wrong and right with the law. However, that was not the case at all.

Maclen Stanley does a really good job of stating the law and how it is and how it became that way and possibly how it could change without really getting into what he believes.

This is what is looked for when I took Criminal Justice classes and was asked to explain aspects of the law. It is about what the law says and how it was decided.

Maclen Stanley also made his book readable. It does have a lot of details, which I probably found easier to read because I have read legal textbooks and court opinions. But because his audience is more for people who know less about the law, he has definitions in the book to help readers understand certain legal terminology.

In “The Law Says What?” there were court cases and stuff I knew about, but there were also things that I had not read about or knew the reasoning behind.

It deals with many important legal aspects that are really relevant and would help people understand why court decisions are made as they are. The book covers aspects from the police’s duty to protect not really being how it is portrayed or absurdities in real court to jurisdiction to the government taking your stuff.

Obviously, hot topics are brought up. You can easily get heated about it, and start disagreeing with what the law says. But I think that is the wrong way to approach this book. It pragmatically tells you, that this is the way it is right now. Not everyone agrees with laws in place right now, but this book is not looking at that.

Of course, the law changes, so the relevancy of this book is kind of short-term. The examples are helpful though, especially modern ones because I saw them on the news.

If you want a good book that teaches a few things about law and why certain cases are decided as they are this is a good book for you.

I also, thought Maclen Stanley had a good voice. It was comedic at times.

The book was also broken up well, which meant it was easy for me to pick up and put down to read it over a few days without getting confused at all.

Obviously, if you get heated about politics and law, this might be a hard read. However, if you set your views aside and want to really learn what American law currently says on this, I think this book provides a good foundation for you to get started on learning about important rules and court cases in the United States.