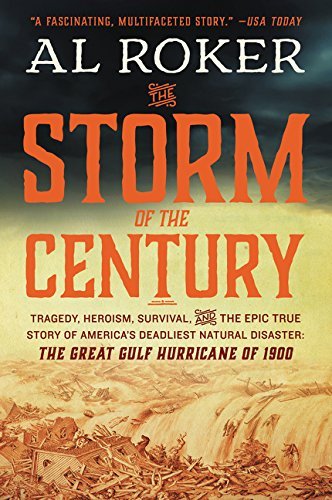 Book Review of
The Storm of the Century

Author: Al Roker
Genre(s): American  History  Nonfiction  Science
Buy the Book Buy the eBook
We are a participant in the Amazon Services LLC Associates Program, an affiliate advertising program designed to provide a means for us to earn fees by linking to Amazon.com and affiliated sites.
Skip to the book review
Publisher Summary:

In this gripping narrative history, Al Roker from NBC’s Today and the Weather Channel vividly examines the deadliest natural disaster in American history—a haunting and inspiring tale of tragedy, heroism, and resilience that is full of lessons for today’s new age of extreme weather.

On the afternoon of September 8, 1900, two-hundred-mile-per-hour winds and fifteen-foot waves slammed into Galveston, the booming port city on Texas’s Gulf Coast. By dawn the next day, the city that hours earlier had stood as a symbol of America’s growth and expansion was now gone. Shattered, grief-stricken survivors emerged to witness a level of destruction never before seen: Eight thousand corpses littered the streets and were buried under the massive wreckage. Rushing water had lifted buildings from their foundations, smashing them into pieces, while wind gusts had upended steel girders and trestles, driving them through house walls and into sidewalks. No race or class was spared its wrath. In less than twenty-four hours, a single storm had destroyed a major American metropolis—and awakened a nation to the terrifying power of nature.

Blending an unforgettable cast of characters, accessible weather science, and deep historical research into a sweeping and dramatic narrative, The Storm of the Century brings this legendary hurricane and its aftermath into fresh focus. No other natural disaster has ever matched the havoc caused by the awesome mix of winds, rain, and flooding that devastated Galveston and shocked a young, optimistic nation on the cusp of modernity. Exploring the impact of the tragedy on a rising country’s confidence—the trauma of the loss and the determination of the response—Al Roker illuminates the United States’s character at the dawn of the “American Century,” while also underlining the fact that no matter how mighty they may become, all nations must respect the ferocious potential of our natural environment.

I really enjoyed Storm of the Century by Al Roker. I grew up in Oregon, far from the Gulf Coast. This is a storm and part of Texas history that I knew very little about. It took me a few chapters to really get into the book, but once I did I really enjoyed it. This is a great read for anyone interested in science and weather. I think it would be a great non-fiction book for teens.