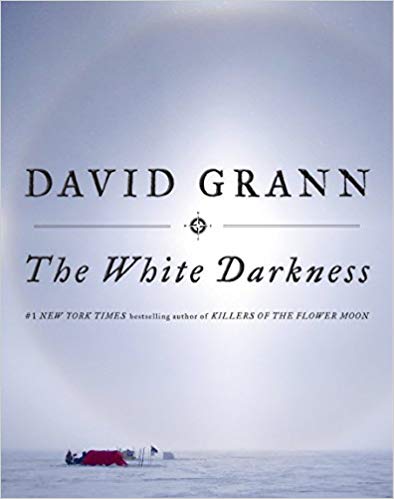 Book Review of
The White Darkness

Author: David Grann
Genre(s): Biographies & Memoirs  History  Nonfiction
Buy the Book Buy the eBook
We are a participant in the Amazon Services LLC Associates Program, an affiliate advertising program designed to provide a means for us to earn fees by linking to Amazon.com and affiliated sites.
Skip to the book review
Publisher Summary:

Henry Worsley was a devoted husband and father and a decorated British special forces officer who believed in honor and sacrifice. He was also a man obsessed. He spent his life idolizing Ernest Shackleton, the nineteenth-century polar explorer, who tried to become the first person to reach the South Pole, and later sought to cross Antarctica on foot. Shackleton never completed his journeys, but he repeatedly rescued his men from certain death, and emerged as one of the greatest leaders in history.

Worsley felt an overpowering connection to those expeditions. He was related to one of Shackleton’s men, Frank Worsley, and spent a fortune collecting artifacts from their epic treks across the continent. He modeled his military command on Shackleton’s legendary skills and was determined to measure his own powers of endurance against them. He would succeed where Shackleton had failed, in the most brutal landscape in the world.

In 2008, Worsley set out across Antarctica with two other descendants of Shackleton’s crew, battling the freezing, desolate landscape, life-threatening physical exhaustion, and hidden crevasses. Yet when he returned home he felt compelled to go back. On November 13, 2015, at age 55, Worsley bid farewell to his family and embarked on his most perilous quest: to walk across Antarctica alone.

David Grann tells Worsley’s remarkable story with the intensity and power that have led him to be called “simply the best narrative nonfiction writer working today.” Illustrated with more than fifty stunning photographs from Worsley’s and Shackleton’s journeys, The White Darkness is both a gorgeous keepsake volume and a spellbinding story of courage, love, and a man pushing himself to the extremes of human capacity.

We loved Killers of the Flower Moon, and he wanted to read something else by David Grann, so he decided to get it. I ended up reading it before he did. In fact, it was the first book that I read in 2019.

Overall I enjoyed the book. It is a small book though and kind of expensive for such a quick read. However, I did enjoy learning about Henry Worsley’s journey across the Antarctica and his fascination with polar exploration. As usual David Grann does a great job with his writing. He draws you into the story.

I do wish though that this had been a bigger book on exploring Antarctica. I know this book is meant to be about one specific man, but I think they could have made this story part of a much larger book about exploring Antarctica or about several Antarctica explorers. I could have been expanded into a full size regular book this way. However, if you love books about exploring, the South Pole, or leadership in general, this is a good read.