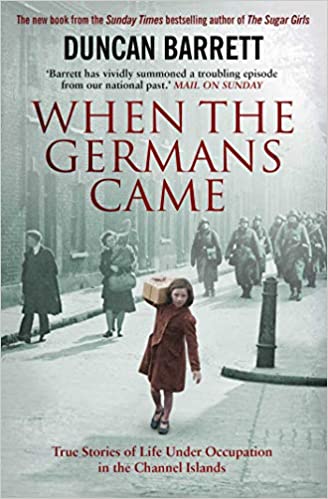 Book Review of
When the Germans Came

Author: Duncan Barrett
Genre(s): History  Nonfiction  WWII
Buy the Book
We are a participant in the Amazon Services LLC Associates Program, an affiliate advertising program designed to provide a means for us to earn fees by linking to Amazon.com and affiliated sites.
Skip to the book review
Publisher Summary:

True-life recollections from the Channel Islanders who were the only British subjects to live under Nazi rule in WWII. ‘An absolutely fascinating account of life under German rule in the Channel Islands during the war. As a Guernsey girl I grew up with these stories and recognise family and friends in these pages. Duncan Barrett has done a brilliant job of reflecting the peculiar challenges that existed for those living under occupation. It is an under-told story of an extraordinary time in recent British history.’  – Sarah Montague, The Today Programme presenter. **The new book from the Sunday Times  bestselling author of Sugar Girls** In the summer of 1940, Britain stood perilously close to invasion. One by one, the nations of Europe had fallen to the unstoppable German  Blitzkrieg , and Hitler’s sights were set on the English coast. And yet, following the success of the Battle of Britain, the promised invasion never came. The prospect of German jackboots landing on British soil retreated into the realm of collective nightmares.  But the specter of what might have been is one that has haunted us down the decades, finding expression in counterfactual history and outlandish fiction. What would a British occupation have looked like?  The answer lies closer to home than we think, in the experiences of the Channel Islanders – the only British people to bear the full brunt of German Occupation.  For five years, our nightmares became their everyday reality. The people of Guernsey, Jersey and Sark got to know the enemy as those on the mainland never could, watching in horror as their towns and villages were suddenly draped in Swastika flags , their cinemas began showing Nazi propaganda films, and Wehrmacht soldiers goose-stepped down their highstreets. Those who resisted the regime, such as the brave men and women who set up underground newspapers or sheltered slave laborers, encountered the full force of Nazi brutality. But in the main, the Channel Islands occupation was a ‘model’ one, a prototype for how the Fuhrer planned to run mainland Britain. As a result, the stories of the islanders are not all misery and terror. Many, in fact are rather funny – tales of plucky individuals trying to get by in almost impossible circumstances, and keeping their spirits up however they could. Unlike their compatriots on the mainland, the islanders had no Blitz to contend with, but they met the thousand other challenges the war brought with a similar indomitable spirit. The story of the Channel Islands during the war is the history that could so nearly have come to pass for the rest of us.  Based on interviews with over a hundred islanders who lived through it, this book tells that story from beginning to end, opening the lid on life in Hitler’s British Isles.

I am not sure where I first heard about When the Germans Came, but it is basically the nonfiction version of The Guernsey Literary and Potato Peel Pie Society. I am working on a whole post comparing the two books, but I will say that I enjoyed When the Germans Came To Town. It had a lot of facts and took me a while to get into it, but once I did, I really enjoyed it.