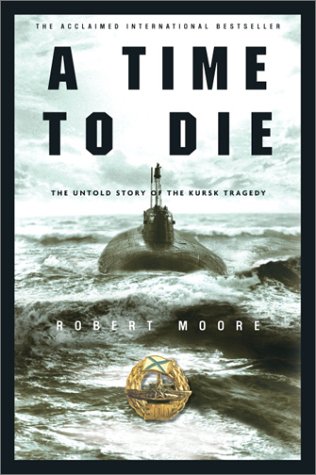 Book Review of
A Time to Die

Author: Robert Moore
Genre(s): History  Nonfiction
Buy the Book Buy the eBook
We are a participant in the Amazon Services LLC Associates Program, an affiliate advertising program designed to provide a means for us to earn fees by linking to Amazon.com and affiliated sites.
Skip to the book review
Publisher Summary:

A At 11:28 a.m. on Saturday, August 12, 2000, high in the Arctic Circle under the roiling surface of the unforgiving Barents Sea, Captain Gennady Lyachin was taking the Kursk, the pride of Russia’s elite Northern Fleet, through the last steps of firing a practice torpedo, part of an elaborate naval exercise. Suddenly, the torpedo exploded in a massive ?reball, instantly incinerating all seven men in the submarine’s forward compartment. The horror, however, was just beginning. The full, gripping story of the remarkable drama inside the Kursk and of the desperate rescue efforts has never been told—until now.

In A Time to Die, a critically acclaimed best-seller in the United Kingdom, international reporter Robert Moore—who covered the Kursk tragedy from Russia as it happened—draws on exclusive access he obtained to top Russian military figures in telling the inside story of the disaster with the factual depth of the best journalism and the compelling moment-by-moment tension of a thriller. He takes us right down inside the Kursk as two massive explosions—the second measuring 3.5 on the Richter scale—rip through compartment after compartment. Bringing the horror of the explosions vividly to life, he details the agonizing drama of the twenty-three men who survived as they fight against time to be rescued.

In a journalistic coup, Moore obtained secret access to the Kursk’s highly restricted Arctic submarine base, and he makes the desolation of that forbidden world palpable on the page. As word of the tragedy breaks, he portrays the fear and growing rage of the families of the crew as they clamor for news of their loved ones and confront Vladimir Putin, Russia’s newly elected president.

Moore also vividly re-creates the nail-biting tension of the heroic but deeply flawed Russian rescue efforts as men are sent down again and again, aboard antiquated mini-subs, in perilous attempts to get to the survivors. As Western rescuers are at last called in, Moore richly describes the fascinating world of the offshore divers who drop everything to make one last, desperate attempt to reach the trapped submariners. A Time to Die is a riveting, brilliantly researched account of the deadliest submarine disaster in history and its devastating human cost.

This was a depressing book, but it was very insightful. It discussed submarines, the Russians, and other such things. This account takes place in 2000. Because of this, the book allowed me to see how far technology has come since then. This tragic event was caused by many things which made this historical event a bit more interesting to read about.