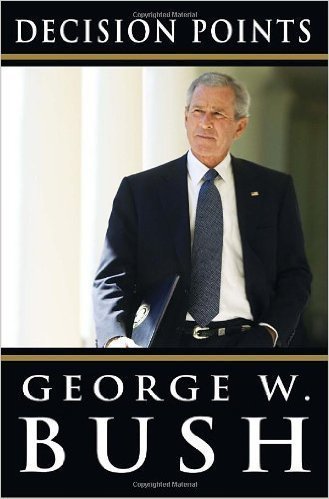 Author: George W. Bush
Genre(s): Biographies  History  Presidential Biographies
Buy the Book Buy the eBook
We are a participant in the Amazon Services LLC Associates Program, an affiliate advertising program designed to provide a means for us to earn fees by linking to Amazon.com and affiliated sites.
Skip to the book review
Publisher Summary:

Decision Points is the extraordinary memoir of America’s 43rd president. Shattering the conventions of political autobiography, George W. Bush offers a strikingly candid journey through the defining decisions of his life.
In gripping, never-before-heard detail, President Bush brings readers inside the Texas Governor’s Mansion on the night of the hotly contested 2000 election; aboard Air Force One on 9/11, in the hours after America’s most devastating attack since Pearl Harbor; at the head of the table in the Situation Room in the moments before launching the war in Iraq; and behind the Oval Office desk for his historic and controversial decisions on the financial crisis, Hurricane Katrina, Afghanistan, Iran, and other issues that have shaped the first decade of the 21st century.

President Bush writes honestly and directly about his flaws and mistakes, as well as his accomplishments reforming education, treating HIV/AIDS in Africa, and safeguarding the country amid chilling warnings of additional terrorist attacks. He also offers intimate new details on his decision to quit drinking, discovery of faith, and relationship with his family.

Decision Points draws a picture of being a presidents son. In his book, George W. Bush creates a good picture of his life in politics and his other success and failures in life. While he gives a good view on his policies and motives in politics, the book is bias to some of his actions and views. He does do a good job of pointing out some of his mistakes and problems. The book did not just focus on politics though. George W. Bush discusses his alcoholism problem and how he was able to stop his obsessive drinking habits. This book was a decent autobiography and I found it intriguing to find out more about this presidents life.