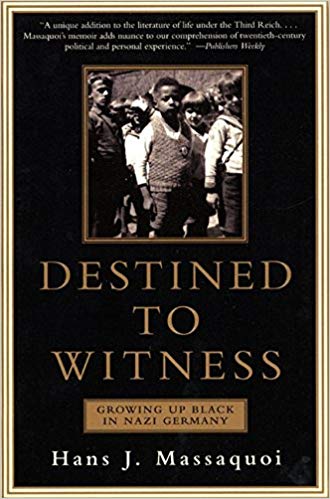 Book Review of
Destined to Witness

Author: Hans J. Massaquoi
Genre(s): Biographies & Memoirs  History  Memoirs  Nonfiction  WWII
Buy the Book Buy the eBook
We are a participant in the Amazon Services LLC Associates Program, an affiliate advertising program designed to provide a means for us to earn fees by linking to Amazon.com and affiliated sites.
Skip to the book review
Publisher Summary:

This is a story of the unexpected.In Destined to Witness, Hans Massaquoi has crafted a beautifully rendered memoir — an astonishing true tale of how he came of age as a black child in Nazi Germany. The son of a prominent African and a German nurse, Hans remained behind with his mother when Hitler came to power, due to concerns about his fragile health, after his father returned to Liberia. Like other German boys, Hans went to school; like other German boys, he swiftly fell under the Fuhrer’s spell. So he was crushed to learn that, as a black child, he was ineligible for the Hitler Youth. His path to a secondary education and an eventual profession was blocked. He now lived in fear that, at any moment, he might hear the Gestapo banging on the door — or Allied bombs falling on his home. Ironic,, moving, and deeply human, Massaquoi’s account of this lonely struggle for survival brims with courage and intelligence.

I love fascinating books about different sides of World War II. Destined to Witness is one of those books. This is the view of Nazi Germany from a bi-racial boy. I love his view and how he realized that the Third Reich was not actually a good thing. I like his stories with his artful description and points that he makes sure to make. I also found his view of American interesting when he moved to the States years after World War II. This was a fun book that I enjoyed. (There was a discussion of him visiting a whore house, and also talked a little bit about going out with girls and how hard it was because the Nazi regime was anti other races and German’s marrying or even being with each other. So I would not recommend this for kids.)