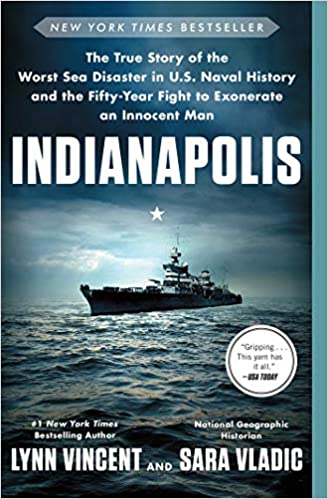 Author: Vincent and Vladic
Genre(s): American  History  Nonfiction  WWII
Buy the Book Buy the eBook
We are a participant in the Amazon Services LLC Associates Program, an affiliate advertising program designed to provide a means for us to earn fees by linking to Amazon.com and affiliated sites.
Skip to the book review
Publisher Summary:

Just after midnight on July 30, 1945, the USS Indianapolis is sailing alone in the Philippine Sea when she is sunk by two Japanese torpedoes. For the next five nights and four days, almost three hundred miles from the nearest land, nearly nine hundred men battle injuries, sharks, dehydration, insanity, and eventually each other. Only 316 will survive.

For the first time Lynn Vincent and Sara Vladic tell the complete story of the ship, her crew, and their final mission to save one of their own in “a wonderful book…that features grievous mistakes, extraordinary courage, unimaginable horror, and a cover-up…as complete an account of this tragic tale as we are likely to have” (The Christian Science Monitor). It begins in 1932, when Indianapolis is christened and continues through World War II, when the ship embarks on her final world-changing mission: delivering the core of the atomic bomb to the Pacific for the strike on Hiroshima.

“Simply outstanding…Indianapolis is a must-read…a tour de force of true human drama” (Booklist, starred review) that goes beyond the men’s rescue to chronicle the survivors’ fifty-year fight for justice on behalf of their skipper, Captain Charles McVay III, who is wrongly court-martialed for the sinking. “Enthralling…A gripping study of the greatest sea disaster in the history of the US Navy and its aftermath” (Kirkus Reviews, starred review), Indianapolis stands as both groundbreaking naval history and spellbinding narrative—and brings the ship and her heroic crew back to full, vivid, unforgettable life. “Vincent and Vladic have delivered an account that stands out through its crisp writing and superb research…Indianapolis is sure to hold its own for a long time” (USA TODAY).

Indianapolis is such a heartbreaking story. It is about a military tragedy. War taking lives. The corruption, blame game of the government.

At the same time, it shows hope and determination of the survivors.

I have a friend who has met one of the survives. I found this to be amazing since there are only just over 300. I knew stories from history, other books, and from my friend who had met the survivor.

I had never sat down and read a book dedicated to it.

I bought this book for my dad because I wanted to read it. So a selfish gift. Oops.

My dad enjoyed it. And I did too because it is so well written. It is not just about the sinking of the ship. Its about the people before after, the circumstances, the environment.

It shows what happened from points of the survivor and the bird in the sky. It also shows the determination of men and also the despair they went through. If you have not read the story, this is a good book to start with and to learn about how the world has always had issues, suffering, concealing, even if it came in different forms.