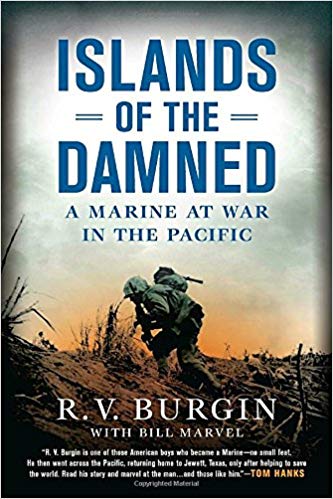 Book Review of
Island of the Damned

Author: R. V. Burgin
Genre(s): Biographies & Memoirs  History  Memoirs  Nonfiction  WWII
Buy the Book Buy the eBook
We are a participant in the Amazon Services LLC Associates Program, an affiliate advertising program designed to provide a means for us to earn fees by linking to Amazon.com and affiliated sites.
Skip to the book review
Publisher Summary:

When a young Texan named R.V. Burgin joined the Marines 1942, he never imagined what was waiting for him a world away in the Pacific. There, amid steamy jungles, he encountered a ferocious and desperate enemy in the Japanese, engaging them in some of the most grueling and deadly fights of the war.

In this remarkable memoir, Burgin reveals his life as a special breed of Marine. Schooled by veterans who had endured the cauldron of Guadalcanal, Burgin’s company soon confronted snipers, repulsed jungle ambushes, encountered abandoned corpses of hara-kiri victims, and warded off howling banzai attacks as they island-hopped from one bloody battle to the next. In his two years at war, Burgin rose from a green private to a seasoned sergeant, fighting from New Britain through Peleliu and on to Okinawa, where he earned a Bronze Star for valor.

With unforgettable drama and an understated elegance, Burgin’s gripping narrative stands alongside those of classic Pacific chroniclers like Robert Leckie and Eugene Sledge—indeed, Burgin was even Sledge’s platoon sergeant. Here is a deeply moving account of World War II, bringing to life the hell that was the Pacific War.

Island of the Damned is a memoir of R. V. Burgin and his memories of World War II in the Pacific. I have read better memoirs, but this one still touched me. Everyone lost friends and saw death so close, and Burgin was no exception. He describes it as he believes he saw it. He is real, but also tells the funny stories that made me laugh. Because when one thinks about it, they were young men who told jokes, did stupid things, wanted to have fun, and so like what young men do today.

The reason I picked this book up was because Burgin is in Heroes of the Pacific by Adam Makkos. I realized that I had picked up Island of the Damned at a used bookstore. So I read it to get Burgin full story rather than just a glimpse of it that Makkos gave me. I am glad I did that.