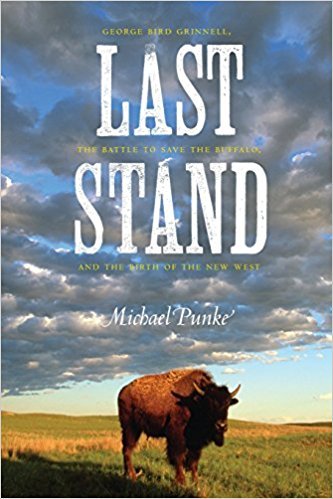 Author: Michael Punke
Genre(s): American  Animals  History  Nonfiction
Buy the Book Buy the eBook
We are a participant in the Amazon Services LLC Associates Program, an affiliate advertising program designed to provide a means for us to earn fees by linking to Amazon.com and affiliated sites.
Skip to the book review
Publisher Summary:

In the last three decades of the nineteenth century, an American buffalo herd once numbering 30 million animals was reduced to twenty-three. It was the era of Manifest Destiny, a gilded age that viewed the West as nothing more than a treasure chest of resources to be dug up or shot down. Supporting hide hunters was the U.S. Army, which considered the eradication of the buffalo essential to victory in its ongoing war on Native Americans.

Into that maelstrom rode young George Bird Grinnell. A scientist and a journalist, a hunter and a conservationist, Grinnell would lead the battle to save the buffalo from extinction. Fighting in the pages of magazines, in Washington’s halls of power, and in the frozen valleys of Yellowstone, Grinnell and his allies sought to preserve an icon. Grinnell shared his adventures with some of the greatest and most infamous characters of the American West—from John James Audubon and Buffalo Bill to George Armstrong Custer and Theodore Roosevelt. Last Stand is a strikingly contemporary story: the saga of Grinnell and the buffalo was the first national battle over the environment. Grinnell’s legacy includes the birth of the conservation movement as a potent political force.

This book is about the old west, but it mainly focuses on the buffalo and what happened to them during the 1800’s. It is a fascinating book, but it was a slow read for me. If you are interested in animals and the old west, this is probably a great book for you, but it may take a little bit to get into.