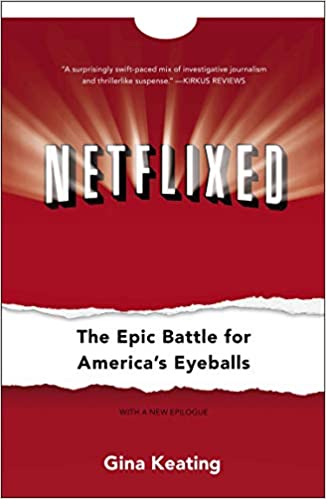 Author: Gina Keating
Genre(s): Business and Time Management  Nonfiction
Buy the Book Buy the eBook
We are a participant in the Amazon Services LLC Associates Program, an affiliate advertising program designed to provide a means for us to earn fees by linking to Amazon.com and affiliated sites.
Skip to the book review
Publisher Summary:

Netflix has come a long way since 1997, when two Silicon Valley entrepreneurs, Marc Ran­dolph and Reed Hastings, decided to start an online DVD store before most people owned a DVD player. They were surprised and elated when launch-day traffic in April 1998 crashed their server and resulted in 150 sales. Today, Netflix has more than 25 million subscribers and annual revenues above $3 billion. Yet long- term success-or even survival-is still far from guaranteed. Journalist Gina Keating recounts the absorbing, fast-paced drama of the company’s turbulent rise to the top and its attempt to invent two new kinds of business. First it engaged in a grueling war against video-store behemoth Blockbuster, transforming movie rental forever. Then it jumped into an even bigger battle for online video streaming against Google, Hulu, Amazon, and the big cable companies. Netflix ushered in such innovations as DVD rental by mail, a patented online queue of upcom­ing rentals, and a recommendation algorithm called Cinematch that proved crucial in its struggle against bigger rivals. Yet for all its success, Netflix is still a polariz­ing company. Hastings is often heralded as a visionary-he was named Business Person of the Year in 2010 by Fortune-even as he has been called the nation’s worst CEO. Netflix also faces disgruntled customers after price increases and other stumbles that could tarnish the brand forever. The quest to become the world’s portal for pre­mium video on demand will determine nothing less than the future of entertainment and the Internet. Drawing on extensive new interviews and her years covering Netflix as a financial and entertainment reporter, Keating makes this tale as absorbing as it is important.

Netflixed was a kindle read I picked up because I like to have a book going on my phone.

I found this to be interesting because it talked a lot about the changes that were happening when I was growing up or right before. Many I cannot remember as we never had Netflix, but it did help me see how DVD players had an influence on my childhood or the internet. You might like it for this reason or because you remember Netflix starting and the battle with Blockbusters and other companies and DVD players and so on.

I loved learning. It was a very factual book. However, I was disappointed because it cut off around 2011 leaving me with so much more I wanted to learn about Netflix.