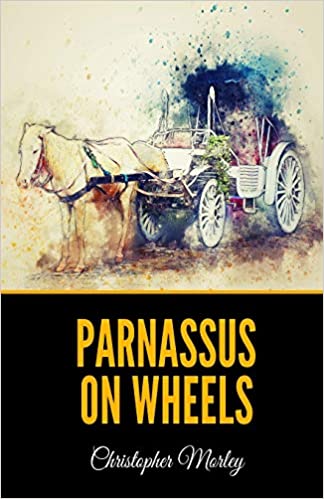 Book Review of
Parnassus On Wheels

Author: Christopher Morley
Genre(s): Classics  Fiction  General Fiction
Buy the Book Buy the eBook
We are a participant in the Amazon Services LLC Associates Program, an affiliate advertising program designed to provide a means for us to earn fees by linking to Amazon.com and affiliated sites.
Skip to the book review
Publisher Summary:

I wonder if there isn’t a lot of bunkum in higher education? I never found that people who were learned in logarithms and other kinds of poetry were any quicker in washing dishes or darning socks. I’ve done a good deal of reading when I could, and I don’t want to “admit impediments” to the love of books, but I’ve also seen lots of good, practical folk spoiled by too much fine print. Reading sonnets always gives me hiccups, too.
I never expected to be an author! But I do think there are some amusing things about the story of Andrew and myself and how books broke up our placid life. When John Gutenberg, whose real name (so the Professor says) was John Gooseflesh, borrowed that money to set up his printing press he launched a lot of troubles on the world.
Andrew and I were wonderfully happy on the farm until he became an author. If I could have foreseen all the bother his writings were to cause us, I would certainly have burnt the first manuscript in the kitchen stove.
Andrew McGill, the author of those books every one reads, is my brother. In other words, I am his sister, ten years younger. Years ago Andrew was a business man, but his health failed and, like so many people in the story books, he fled to the country, or, as he called it, to the bosom of Nature. He and I were the only ones left in an unsuccessful family. I was slowly perishing as a conscientious governess in the brownstone region of New York. He rescued me from that and we bought a farm with our combined savings. We became real farmers, up with the sun and to bed with the same. Andrew wore overalls and a soft shirt and grew brown and tough. My hands got red and blue with soapsuds and frost; I never saw a Redfern advertisement from one year’s end to another, and my kitchen was a battlefield where I set my teeth and learned to love hard work. Our literature was government agriculture reports, patent medicine almanacs, seedsmen’s booklets, and Sears Roebuck catalogues. We subscribed to Farm and Fireside and read the serials aloud. Every now and then, for real excitement, we read something stirring in the Old Testament—that cheery book Jeremiah, for instance, of which Andrew was very fond. The farm did actually prosper, after a while; and Andrew used to hang over the pasture bars at sunset, and tell, from the way his pipe burned, just what the weather would be the next day.

It is a novel of a writer, a widow, a farm, and a traveling bookseller. This is a book about books but so much more. It is a fun quaint story that was just the book I needed to read.