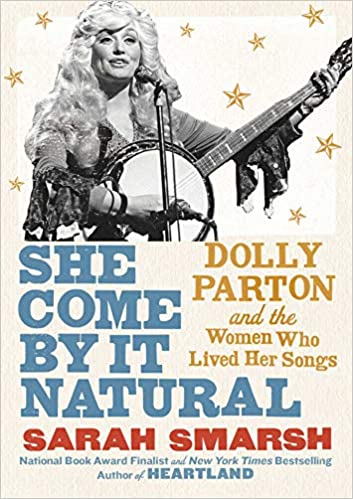 Book Review of
She Come By It Natural

Author: Sarah Smarsh
Genre(s): Biographies & Memoirs  Nonfiction
Buy the Book Buy the eBook
We are a participant in the Amazon Services LLC Associates Program, an affiliate advertising program designed to provide a means for us to earn fees by linking to Amazon.com and affiliated sites.
Skip to the book review
Publisher Summary:

Growing up amid Kansas wheat fields and airplane factories, Sarah Smarsh witnessed firsthand the particular vulnerabilities—and strengths—of women in working poverty. Meanwhile, country songs by female artists played in the background, telling powerful stories about life, men, hard times, and surviving. In her family, she writes, “country music was foremost a language among women. It’s how we talked to each other in a place where feelings aren’t discussed.” And no one provided that language better than Dolly Parton.

Smarsh challenged a typically male vision of the rural working class with her first book, Heartland, starring the bold, hard-luck women who raised her. Now, in She Come By It Natural, originally published in a four-part series for The Journal of Roots Music, No Depression, Smarsh explores the overlooked contributions to social progress by such women—including those averse to the term “feminism”—as exemplified by Dolly Parton’s life and art.

Far beyond the recently resurrected “Jolene” or quintessential “9 to 5,” Parton’s songs for decades have validated women who go unheard: the poor woman, the pregnant teenager, the struggling mother disparaged as “trailer trash.” Parton’s broader career—from singing on the front porch of her family’s cabin in the Great Smoky Mountains to achieving stardom in Nashville and Hollywood, from “girl singer” managed by powerful men to leader of a self-made business and philanthropy empire—offers a springboard to examining the intersections of gender, class, and culture.

Infused with Smarsh’s trademark insight, intelligence, and humanity, She Come By It Natural is a sympathetic tribute to the icon Dolly Parton and—call it whatever you like—the organic feminism she embodies.

She Come By It Natural by Sarah Smarsh is about Dolly Parton and the Women Who Lived Her Songs. This book is getting great reviews both on Amazon and by book bloggers and influencers, but I have mixed thoughts on this one.

I really enjoyed learning about Dolly Parton. She is a great businesswoman. She has survived a lot, both during her childhood and in her career to become what she is today. A lot of people have characterized Dolly Parton as a dumb blonde, but she is far from that. She has worked hard and stood up for what she believed was right.

My mixed thoughts on this book have more to do with the way it was written and the style of the book.

I am glad I read this book, it just wasn’t quite what I thought it was going to be.