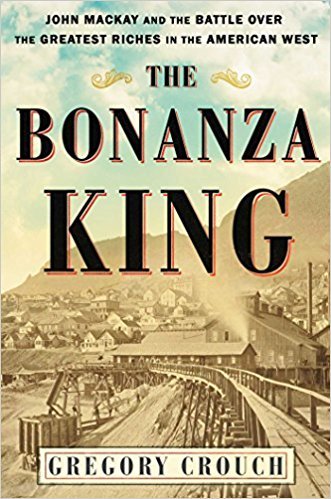 Book Review of
The Bonanza King

Author: Gregory Crouch
Genre(s): American  Biographies  Biographies & Memoirs  History  Nonfiction
Buy the Book Buy the eBook
We are a participant in the Amazon Services LLC Associates Program, an affiliate advertising program designed to provide a means for us to earn fees by linking to Amazon.com and affiliated sites.
Skip to the book review
Publisher Summary:

The rags-to-riches American frontier tale of an Irish immigrant who outwits, outworks, and outmaneuvers thousands of rivals to take control of Nevada’s Comstock Lode—the rich body of gold and silver so immensely valuable that it changed the destiny of the United States.

Born in 1831, John W. Mackay was a penniless Irish immigrant who came of age in New York City, went to California during the Gold Rush, and mined without much luck for eight years. When he heard of riches found on the other side of the Sierra Nevada Mountains in 1859, Mackay abandoned his claim and walked a hundred miles to the Comstock Lode in Nevada.

Over the course of the next dozen years, Mackay worked his way up from nothing, thwarting the pernicious “Bank Ring” monopoly to seize control of the most concentrated cache of precious metals ever found on earth, the legendary “Big Bonanza,” a stupendously rich body of gold and silver ore discovered 1,500 feet beneath the streets of Virginia City, the ultimate Old West boomtown. But for the ore to be worth anything it had to be found, claimed, and successfully extracted, each step requiring enormous risk and the creation of an entirely new industry.

Now Gregory Crouch tells Mackay’s amazing story—how he extracted the ore from deep underground and used his vast mining fortune to crush the transatlantic telegraph monopoly of the notorious Jay Gould. When Mackay died in 1902, front-page obituaries in Europe and the United States hailed him as one of the most admired Americans of the age. Featuring great period photographs and maps, The Bonanza King is a dazzling tour de force, a riveting history of Virginia City, Nevada, the Comstock Lode, and America itself.

The Bonanza King is a an awesome nonfiction read. I love reading about the west and so when I saw this book at Costco I just had to pick it up. I have read a lot about mining and history of the old west, so some of this was old but a lot was new. I enjoyed learning more about mining and a more in depth look into the Comstock and the people who were invested in mining. John Mackay was a fascinating man to look at. He is the true rags to riches story that Americans think about. The book was not all about him, which I liked because it allowed me to learn more about others in the west and not just one man.

I read Bonanza King for my nonfiction books for every state challenge. I am glad I read it and it worked great for my Nevada book, but Grace enjoyed this one way more than I did. I learned a lot about mining and the old west, but this book had a lot of facts that were a bit dry to me. I do agree with Grace that it is a great rags to riches story and what hard work and dedication can do. If you love books about the old west or books with interesting facts about America you will probably enjoy this one, but I think this book is probably one that many people would be fine skipping.