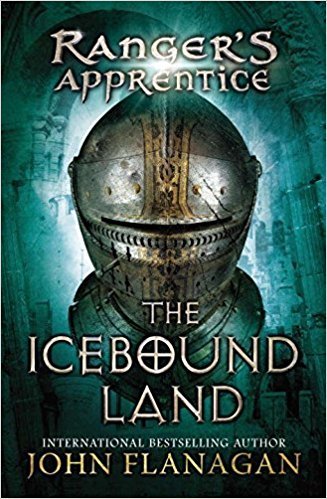 Book Review of
The Icebound Land

Author: John Flanagan
Genre(s):   Fiction (Children/YA)
Buy the Book Buy the eBook
We are a participant in the Amazon Services LLC Associates Program, an affiliate advertising program designed to provide a means for us to earn fees by linking to Amazon.com and affiliated sites.
Skip to the book review
Publisher Summary:

Kidnapped after the fierce battle with Lord Morgarath, Will and Evanlyn are bound for Skandia as captives aboard a fearsome wolfship. Halt has sworn to rescue Will, and he will do anything to keep his promise–even defy his King.

Expelled from the Rangers he has served so loyally, Halt is joined by Will’s friend Horace as he travels toward Skandia. On their way, they are challenged constantly by freelance knights–but Horace knows a thing or two about combat. Soon he begins to attract the attention of knights and warlords for miles around with his uncanny skill. Even so, will they be in time to rescue Will from a horrific life of slavery?

The smash hit series continues with another heart stopping adventure.

Perfect for fans of J.R.R. Tolkien’s Lord of the Rings, T.H. White’s The Sword in the Stone, Christopher Paolini’s Eragon series, and George R. R. Martin’s Game of Thrones/A Song of Ice and Fire series.

I felt that The Icebound Land lacked all the excitement of the first two books in the Ranger Apprentice series. It was good overall, but maybe I did not enjoy it as much because Will one of the main character’s did not have as much of a prominent part in this book. It was also a little different setting then the other books giving The Icebound Land a different feel.