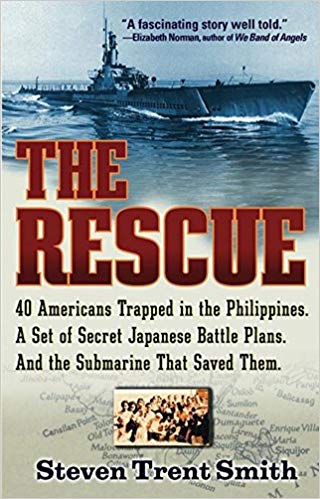 Book Review of
The Rescue

Author: Steven Trent Smith
Genre(s): Biographies & Memoirs  History  Nonfiction  WWII
Buy the Book Buy the eBook
We are a participant in the Amazon Services LLC Associates Program, an affiliate advertising program designed to provide a means for us to earn fees by linking to Amazon.com and affiliated sites.
Skip to the book review
Publisher Summary:

Praise for The Rescue

“”Steven Trent Smith grapples boldly with several big subjects: the Japanese occupation of the Philippines; the capture of Japan’s ‘Z Plan’ (the decisive-battle strategy for destroying the U.S. Pacific Fleet); the rescue by submarine of forty Americans stranded in the Philippines; the climactic Battle of the Philippine Sea. Meticulously researched and well written, The Rescue ties these elements together into an epic that is emotionally engaging from start to rousing finish.”” -Martin Russ, author of Breakout and The Last Parallel

“”Smith’s thoroughly researched, detailed account of the brave American and Filipino guerrillas on Negros Island in the Philippines will do much to introduce readers to this little known aspect of World War II in the Pacific. . . . This is a fascinating story well told.”” -Elizabeth Norman, author of the award-winning We Band of Angels: The Untold Story of American Nurses Trapped on Bataan by the Japanese

“”The Rescue is a delightful journey with the gallant few who resisted the Japanese occupation of the Philippines and who shaped the larger events wh ich led to victory in the Pacific. Smith’s brilliant research and unique storytelling make this account a must for all who enjoy history and a grand adventure.”” -Peter Huchthausen, author of October Fury

“”With a photojournalist’s eye for action and detail, Steven Trent Smith’s The Rescue is a remarkable achievement. The incredible mission to save forty Americans stranded in the Philippines reads more like a work of fiction. . . . A must-read for all those interested in one of the great secret submarine operations of World War II and all action adventure fans alike!”” -Richard P. Henrick, author of Crimson Tide and Nightwatch

The Rescue is a great World War II true story about a rescue mission in the Philippians. I have read similar books to it like Guerrilla’s Wife and The Edge of Terror. This one is about a different rescue mission though. It was a little choppy in how it was written, but it had to be to be able to cover all the people’s lives who were rescued. I also found out some about the marines and submarines. It also talked a lot about the people and what they went through to survive the Japanese invasion. I recommend this book if you like different views on World War II.