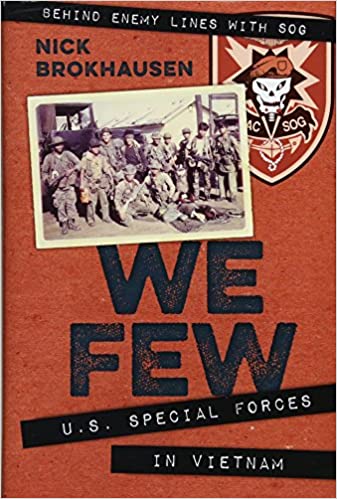 Book Review of
We Few U.S. Special Forces In Vietnam

Author: Nick Brokhausen
Genre(s): History  Military  Nonfiction  Vietnam
Buy the Book Buy the eBook
We are a participant in the Amazon Services LLC Associates Program, an affiliate advertising program designed to provide a means for us to earn fees by linking to Amazon.com and affiliated sites.
Skip to the book review
Publisher Summary:

This riveting memoir details the actions and experiences of a small group of Americans and their allies who were the backbone of ground reconnaissance in the Republic of Vietnam during the Vietnam War. On his second tour to Vietnam, Nick Brokhausen served in Recon Team Habu, CCN. This unit was part of MACV-SOG (Military Assistance Command Vietnam Studies and Observations Group), or Studies and Observations Group as it was innocuously called. The small recon companies that were the center of its activities conducted some of the most dangerous missions of the war, infiltrating areas controlled by the North Vietnamese in Laos, Vietnam, and Cambodia. The companies never exceeded more than 30 Americans, yet they were the best source for the enemy’s disposition and were key to the US military being able to take the war to the enemy, by utilizing new and innovative technology and tactics dating back to the French and Indian Wars.

Brokhausen’s group racked up one of the most impressive records of awards for valor of any unit in the history of the United States Army. It came at a terrible price, however; the number of wounded and killed in action was incredibly high. Those missions today seem suicidal. In 1970 equally so, yet these men went out day after day with their indigenous allies – Montagnard tribesmen, Vietnamese, and Chinese Nungs – and faced the challenges with courage and resolve.

We Few was a buy from a used bookstore. It sounded interesting, so I picked it up.

I did find it interesting, but I would not call it a great read. I have not read many Vietnam memoirs, so I do not have much to compare it to. However, compared to other memoirs in different genres, it is pretty low.

There are lots of funny, crazy stories. The writing could be much better. There are sometime sections that could have had more detail or less.  Nick Brokhausen has a unique story because he worked with local people. He also was special forces.

I think the ending was good. Near the end, it was tense scenes of war and the true problems of war.

The beginning though was more chaotic and harder to get through. So you will have to decide if it is worth the journey. It is a unique story, so maybe it is.

Warning there is a lot of language. There are also other typical things that wild young people do that Nick does.