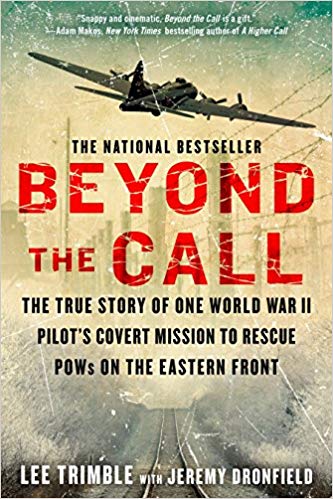 Book Review of
Beyond the Call

Author: Lee Trimble
Genre(s): Biographies  Biographies & Memoirs  History  Nonfiction  WWII
Buy the Book Buy the eBook
We are a participant in the Amazon Services LLC Associates Program, an affiliate advertising program designed to provide a means for us to earn fees by linking to Amazon.com and affiliated sites.
Skip to the book review
Publisher Summary:

This is the inspiring true story of Captain Robert Trimble, who laid his life on the line to rescue hundreds of World War II POWs, including women and children, on the Eastern Front.

Near the end of World War II, thousands of Allied ex-prisoners of war were abandoned to wander the war-torn Eastern Front. With no food, shelter, or supplies, the POWs were an army of dying men. As the Red Army advanced across Poland, the Nazi prison camps were liberated. In defiance of humanity, the freed Allied prisoners were discarded without aid. The Soviets viewed POWs as cowards, and regarded all refugees as potential spies or partisans.

The United States repeatedly offered to help, but were refused. With relations between the Allies strained, a plan was conceived for an undercover rescue mission. In total secrecy, the OSS chose an obscure American air force detachment stationed at a Ukrainian airfield. The man they picked to undertake it was veteran 8th Air Force bomber pilot Captain Robert Trimble.

With little covert training, Trimble took the mission. He would survive by wit, courage, and determination. This is the compelling, true story of an American hero who risked everything to bring his fellow soldiers home to safety and freedom.

Beyond the Call is going to be one of my favorite reads of 2019. I know it is a little early in the year to say that, but this is how much I loved reading this book. I could literally not put it down.

Beyond the Call is a amazing and very rarely told story. I had never heard about Captain Trimble or the POW’s who were struggling to get away from both the Germans and the Russians. I felt so connected to the characters as the author Lee Trimble tells their realistic struggles.

The writing in this book is what made it so good. It was so well written. It was not written like a history book, but more like a well written fiction book (I know some people do not like that comparison, but it is the best way to describe it.).

If you have ever wanted to read something about World War II, I recommend that you try this book. If you love World War II, then you will love this book because this is a unique story of World War II that is different than most other World War II stories that I have read and enjoyed.