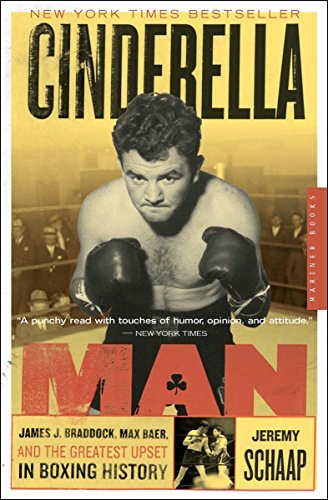 Author: Jeremy Schaap
Genre(s): American  Biographies  Biographies & Memoirs  History  Nonfiction
Buy the Book Buy the eBook
We are a participant in the Amazon Services LLC Associates Program, an affiliate advertising program designed to provide a means for us to earn fees by linking to Amazon.com and affiliated sites.
Skip to the book review
Publisher Summary:

James J. Braddock was a once promising light heavyweight. But a string of losses in the ring and a broken right hand happened to coincide with the Great Crash of 1929—and Braddock was forced to labor on the docks of Hoboken. Only his manager, Joe Gould, still believed in him.

Gould looked out for the burly, quiet Irishman, finding matches for Braddock to help him feed his wife and children. Together, they were about to stage the greatest comeback in fighting history. Within twelve months, Braddock went from being on the relief rolls to facing heavyweight champion Max Baer, renowned for having allegedly killed two men in the ring. A brash Jewish boxer from the West Coast, Baer was heavily favored—but Braddock carried the hopes and dreams of the working class on his shoulders, and when he emerged victorious against all odds, the shock was palpable—and the cheers were deafening. In the wake of his surprise win, Damon Runyon dubbed him “Cinderella Man.”

Against the gritty backdrop of the 1930s, Cinderella Man brings this dramatic all-American story to life, telling a classic David and Goliath tale that transcends the sport.

I loved Cinderella Man. It was such an amazing story that was well written. I think it will make one of my top books from 2018 because I had so much trouble putting it down. It was slow to start with and was a bit confusing because it jumps ahead and then comes back to the beginning of story. Once I got past the first chapter, I couldn’t stop enjoying it. This is a true comeback that encourages people to try. The book though also integrates boxing history and how boxing and its rules work. I learned so much and was also able to understand more of how people felt during the Depression and how so much of society loved boxing years ago.