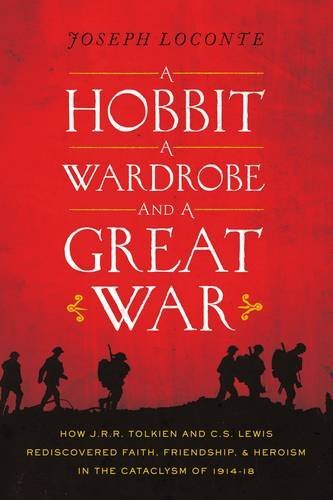 Book Review of
A Hobbit, A Wardrobe, and A Great War

Author: Joseph Loconte
Genre(s): Biographies & Memoirs  History  Nonfiction  WWI
Buy the Book Buy the eBook
We are a participant in the Amazon Services LLC Associates Program, an affiliate advertising program designed to provide a means for us to earn fees by linking to Amazon.com and affiliated sites.
Skip to the book review
Publisher Summary:

The untold story of how the First World War shaped the lives, faith, and writings of J. R. R. Tolkien and C. S. Lewis—now in paperback.

The First World War laid waste to a continent and permanently altered the political and religious landscape of the West. For a generation of men and women, it brought the end of innocence—and the end of faith. Yet for J. R. R. Tolkien and C. S. Lewis, the Great War deepened their spiritual quest. Both men served as soldiers on the Western Front, survived the trenches, and used the experience of that conflict to ignite their Christian imagination. Had there been no Great War, there would have been noHobbit, no Lord of the Rings, no Narnia, and perhaps no conversion to Christianity by C. S. Lewis.

Unlike a generation of young writers who lost faith in the God of the Bible, Tolkien and Lewis produced epic stories infused with the themes of guilt and grace, sorrow and consolation. Giving an unabashedly Christian vision of hope in a world tortured by doubt and disillusionment, the two writers created works that changed the course of literature and shaped the faith of millions. This is the first book to explore their work in light of the spiritual crisis sparked by the conflict.

J.R.R. Tolkien and C.S. Lewis are such a huge part of the literary world, so many people have read and been impacted by their work. But what made them who they were? How did the come up with the stories that they did? The book A Hobbit, A Wardrobe, and A Great War looks at some of what shaped Tolkien and Lewis as writings.

The one thing that had a major impacted was their experiences in WWI. This helped them become the writers that they became. Their descriptions of battles, war, fields and trees destroyed, and more, come from what they saw and experienced. They knew first hand that tragedies of war and the sinfulness of man, which is what made this book fascinating to me. I really enjoyed learning about how WWI shaped them and how they wrote. It was also interesting to read about how they challenged and helped each other. Both Tolkien and Lewis needed their experiences with each other and with fighting in WWI to become the writers that they were.