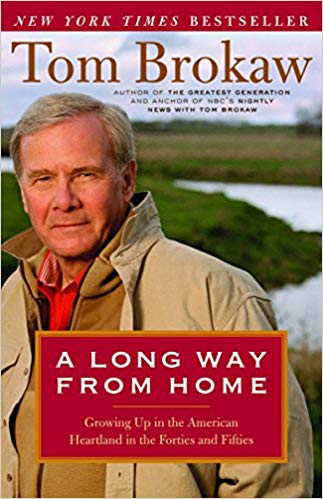 Book Review of
A Long Way From Home

Author: Tom Brokaw
Genre(s): Biographies & Memoirs  Memoirs  Nonfiction
Buy the Book Buy the eBook
We are a participant in the Amazon Services LLC Associates Program, an affiliate advertising program designed to provide a means for us to earn fees by linking to Amazon.com and affiliated sites.
Skip to the book review
Publisher Summary:

From his parents’ life in the Thirties, on to his boyhood along the Missouri River and on the prairies of South Dakota in the Forties, into his early journalism career in the Fifties and the tumultuous Sixties, up to the present, this personal story is a reflection on America in our time. Tom Brokaw writes about growing up and coming of age in the heartland, and of the family, the people, the culture and the values that shaped him then and still do today.

His father, Red Brokaw, a genius with machines, followed the instincts of Tom’s mother Jean, and took the risk of moving his small family from an Army base to Pickstown, South Dakota, where Red got a job as a heavy equipment operator in the Army Corps of Engineers’ project building the Ft. Randall dam along the Missouri River. Tom Brokaw describes how this move became the pivotal decision in their lives, as the Brokaw family, along with others after World War II, began to live out the American Dream: community, relative prosperity, middle class pleasures and good educations for their children.

“Along the river and in the surrounding hills, I had a Tom Sawyer boyhood,” Brokaw writes; and as he describes his own pilgrimage as it unfolded—from childhood to love, marriage, the early days in broadcast journalism, and beyond—he also reflects on what brought him and so many Americans of his generation to lead lives a long way from home, yet forever affected by it.

A Long Way From Home Growing Up In The American Heartland by Tom Brokaw is an honest look at life in South Dakota. I picked this book up at a used book store and wasn’t sure what to expect. Most people that grew up in the 1970’s and 1980’s watched Tom Brokaw deliver the news for years. He was a staple in television news for years. I have had mixed thoughts about books by reporters and famous people. Their names are often used to sell a book that is only written because their name is attached to it. I was worried that this book would be the same, but it wasn’t it. Tom Brokaw wrote a compelling book about his life growing up in South Dakota. A life that was not easy. He covers much about his family during the Great Depression, and how it effected them. He talks about overcoming hardships and how life in a small town impacts you. He also talks about how life in South Dakota has changed over the years.

Many people from small town middle of nowhere places don’t like or appreciate where they came from. Tom Brokaw doesn’t feel that way. He realizes that how and where he grew up made him who he was and helped him accomplish what he did. This book shares his story in a way that draws you in and helps you understand life in small town South Dakota.