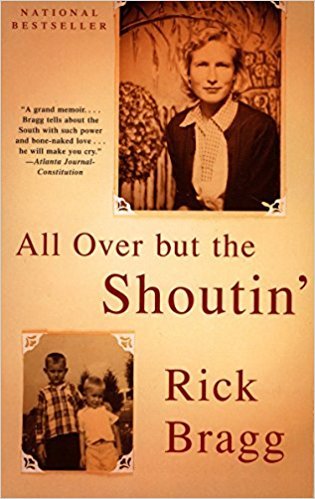 Book Review of
All Over But the Shoutin’

Author: Rick Bragg
Genre(s): Biographies & Memoirs  Nonfiction
Buy the Book Buy the eBook
We are a participant in the Amazon Services LLC Associates Program, an affiliate advertising program designed to provide a means for us to earn fees by linking to Amazon.com and affiliated sites.
Skip to the book review
Publisher Summary:

This haunting, harrowing, gloriously moving recollection of a life on the American margin is the story of Rick Bragg, who grew up dirt-poor in northeastern Alabama, seemingly destined for either the cotton mills or the penitentiary, and instead became a Pulitzer Prize-winning reporter for The New York Times. It is the story of Bragg’s father, a hard-drinking man with a murderous temper and the habit of running out on the people who needed him most.

But at the center of this soaring memoir is Bragg’s mother, who went eighteen years without a new dress so that her sons could have school clothes and picked other people’s cotton so that her children wouldn’t have to live on welfare alone. Evoking these lives–and the country that shaped and nourished them–with artistry, honesty, and compassion, Rick Bragg brings home the love and suffering that lie at the heart of every family. The result is unforgettable.

All Over But the Shoutin’ is by Rick Bragg, who some of you might recognize from his columns in Southern Living Magazine. I read many of his Southern Living articles, but this is the first book I have read by him. It is his memoir of growing up in the south. It is real life stuff. Real life isn’t always glamorous or easy to read about, but it is real life.

I grew up in Oregon, about as far from the south as you can get. I currently live in Oklahoma, which some people call the south, but it really isn’t. There are some things that Oklahoma and the south have in common. A love for okra, black eyed peas, saying y’all, and many other things, but we aren’t really the true south. Since I have never lived in the south, I love reading books that show others what living in the south is like. This book did just that and I can’t wait to read more by Rick Bragg.