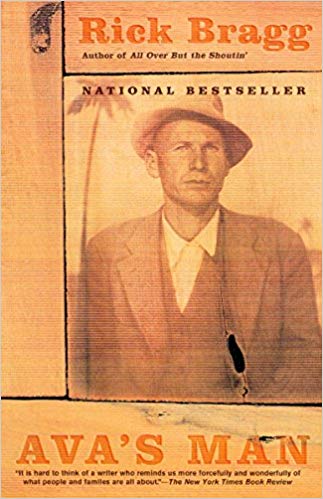 Author: Rick Bragg
Genre(s): Biographies  Biographies & Memoirs  Nonfiction
Buy the Book Buy the eBook
We are a participant in the Amazon Services LLC Associates Program, an affiliate advertising program designed to provide a means for us to earn fees by linking to Amazon.com and affiliated sites.
Skip to the book review
Publisher Summary:

With the same emotional generosity and effortlessly compelling storytelling that made All Over But the Shoutin’ a national bestseller, Rick Bragg continues his personal history of the Deep South. This time he’s writing about his grandfather Charlie Bundrum, a man who died before Bragg was born but left an indelible imprint on the people who loved him. Drawing on their memories, Bragg reconstructs the life of an unlettered roofer who kept food on his family’s table through the worst of the Great Depression; a moonshiner who drank exactly one pint for every gallon he sold; an unregenerate brawler, who could sit for hours with a baby in the crook of his arm.

In telling Charlie’s story, Bragg conjures up the backwoods hamlets of Georgia and Alabama in the years when the roads were still dirt and real men never cussed in front of ladies. A masterly family chronicle and a human portrait so vivid you can smell the cornbread and whiskey, Ava’s Man is unforgettable.

This is the second book by Rick Bragg that I have read, and I love his writing. Ava’s Man is the story of Rick Bragg’s grandfather, but in telling that story, it really incorporates the story of his whole family. This book is about life in the south during a time that many others have written about, but Rick Bragg’s style of writing makes it so interesting to read. His writing makes nonfiction books read like fiction. If you live in the south or would like to learn more about the life and culture in the south, this is a good read. I really enjoyed this book.

I will add one thing that I didn’t like about this book. Many books like this claim that certain things are only in the south or are more common in the south. Poverty is poverty and much of what happens is not only in the south. Making whiskey in the woods while avoiding the law, may be a southern thing, but poverty and many of the issues and problems that result because of it are everywhere. Those things are in rural America in the north and the south. They are on the east coast and the west coast. At one point, the author talks about government cheese and big tubs of government peanut butter being a southern thing, well I grew up in rural Oregon, about as far from the south as you can get, and government cheese and peanut butter was a thing there as well. People there were waiting in line for cheese, peanut butter, and other foods, all over the U.S not just in the south. It may be more popular to write books about poverty and the south, but there are extreme areas of poverty all over. Just because it is not written about doesn’t mean it is not there.