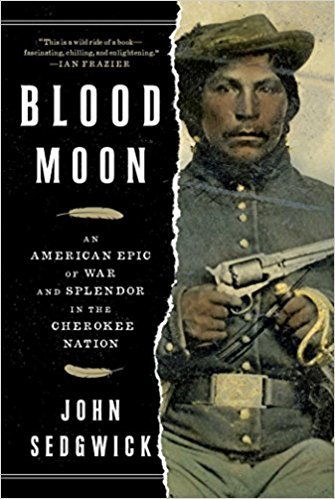 Author: John Sedgwick
Genre(s): American  History  Nonfiction
Buy the Book Buy the eBook
We are a participant in the Amazon Services LLC Associates Program, an affiliate advertising program designed to provide a means for us to earn fees by linking to Amazon.com and affiliated sites.
Skip to the book review
Publisher Summary:

It begins in the years after America wins its independence, when the Cherokee rule expansive lands of the Southeast that encompass eight present-day states. With its own government, language, newspapers, and religious traditions, it is one of the most culturally and socially advanced Native American tribes in history. But over time this harmony is disrupted by white settlers who grow more invasive in both number and attitude.

In the midst of this rising conflict, two rival Cherokee chiefs, different in every conceivable way, emerge to fight for control of their people’s destiny. One of the men, known as The Ridge—short for He Who Walks on Mountaintops—is a fearsome warrior who speaks no English but whose exploits on the battlefield are legendary. The other, John Ross, is descended from Scottish traders and looks like one: a pale, unimposing half-pint who wears modern clothes and speaks not a word of Cherokee. At first, the two men are friends and allies. To protect their sacred landholdings from white encroachment, they negotiate with almost every American president from George Washington through Abraham Lincoln. But as the threat to their land and their people grows more dire, they break with each other on the subject of removal, breeding a hatred that will lead to a bloody civil war within the Cherokee Nation, the tragedy and heartbreak of the Trail of Tears, and finally, the two factions battling each other on opposite sides of the US Civil War.

Through the eyes of these two primary characters, John Sedgwick restores the Cherokee to their rightful place in American history in a dramatic saga of land, pride, honor, and loss that informs much of the country’s mythic past today. It is a story populated with heroes and scoundrels of all varieties—missionaries, gold prospectors, linguists, journalists, land thieves, schoolteachers, politicians, and more. And at the center of it all are two proud men, Ross and Ridge, locked in a life-or-death struggle for the survival of their people.

This propulsive narrative, fueled by meticulous research in contemporary diaries and journals, newspaper reports, and eyewitness accounts—and Sedgwick’s own extensive travels within Cherokee lands from the Southeast to Oklahoma—brings two towering figures back to life with reverence, texture, and humanity. The result is a richly evocative portrait of the Cherokee that is destined to become the defining book on this extraordinary people.

The book Blood Moon was a good book to learn about the Cherokees. I was able to learn a lot myself, which has helped me understand the Trail of Tears, how the Cherokee got their language, and much more. I will say that a lot happens and a ton of information is covered, so it can be a slow. I myself had some trouble keeping up with all the people and places mentioned. If you don’t know much about the Cherokees, this is great book to learn about their history since their struggle for their land began.