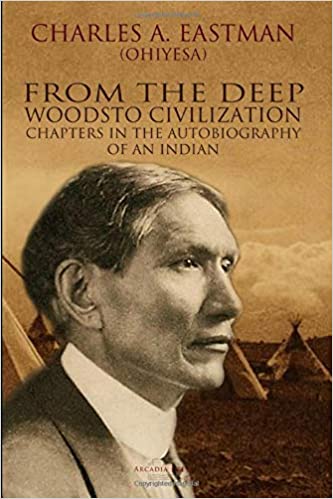 Book Review of
From the Deep Woods to Civilization

Author: Charles Eastman
Genre(s): Biographies & Memoirs  Memoirs  Nonfiction
Buy the Book Buy the eBook
We are a participant in the Amazon Services LLC Associates Program, an affiliate advertising program designed to provide a means for us to earn fees by linking to Amazon.com and affiliated sites.
Skip to the book review
Publisher Summary:

“Has a many-sided appeal …. This stimulating book is one of the few that really deserve the over-worked term, a human document.” — Publishers Weekly. In the first of his memoirs, the popular Indian Boyhood, Charles Alexander Eastman recounted his traditional upbringing among the Santee Sioux. From the Deep Woods to Civilization resumes his story, recounting his abrupt departure from tribal life at age 15 to pursue his education among whites — a path that led him to certification as a medical doctor, the publication of many successful books, and a lifetime of tireless efforts to benefit his native culture. Through his social work and his writings, Eastman became one of the best-known Indians of the early twentieth century and an important force in interpreting and relating the spiritual depth and greatness of the Native American traditions.Eastman became a physician in hopes of serving the Native American community; he received a Bachelor of Science degree from Dartmouth in 1887 and a medical degree from Boston University in 1890. He began college just a few months after the Battle of Little Bighorn, and his first job as a physician at Pine Ridge Reservation coincided with the Ghost Dance uprisings that culminated in the U. S. Army’s attack at Wounded Knee. The only doctor available to assist the massacre’s victims, Eastman writes movingly of the event’s appalling inhumanity and injustice. Afterward, he lobbied Capitol Hill on behalf of the Sioux and devoted the rest of his life, both in and out of government service, to helping Indians adapt to the white world while retaining the best of their own culture. His autobiography resonates with the impassioned thoughts and experiences of a profound contributor to the richness of American culture.

From the Deep Woods to Civilization by Charles Eastman was one of my favorite reads of 2020. I know I read it for school, but it was that good. I have recommended it to my dad too.

It tells the story of Eastman as a Sioux and how it was like for him as a child and as a doctor. The biggest impact of the story for me was in the Eastman talking of his experience of going up to Wounded Knee after the massacre. It showed the gravity of that and also the mistreatment of the Native Americans seen in stories like how White people wanted Eastman to practice as a Native American people’s doctor rather than practice White people’s medicine, which he had been trained in. If you are looking for first-person memoir of a Native American, this would be a good one to pick up.