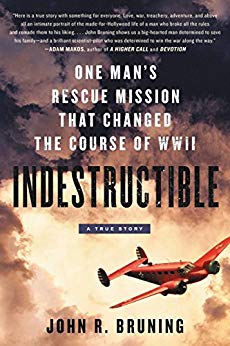 Author: John R. Bruning
Genre(s): Biographies  Biographies & Memoirs  History  Nonfiction  WWII
Buy the Book Buy the eBook
We are a participant in the Amazon Services LLC Associates Program, an affiliate advertising program designed to provide a means for us to earn fees by linking to Amazon.com and affiliated sites.
Skip to the book review
Publisher Summary:

From the knife fights and smuggling runs of his youth to his fiery days as a pioneering naval aviator, Paul Irving “Pappy” Gunn played by his own set of rules and always survived on his wits and fists. But when he fell for a conservative Southern belle, her love transformed him from a wild and reckless airman to a cunning entrepreneur whose homespun engineering brilliance helped launch one of the first airlines in Asia.

Pappy was drafted into MacArthur’s air force when war came to the Philippines; and while he carried out a top-secret mission to Australia, the Japanese seized his family. Separated from his beloved wife, Polly, and their four children, Pappy reverted to his lawless ways. He carried out rescue missions with an almost suicidal desperation. Even after he was shot down twice and forced to withdraw to Australia, he waged a one-man war against his many enemies–including the American high command and the Japanese–and fought to return to the Philippines to find his family.

Without adequate planes, supplies, or tactics, the U.S. Army Air Force suffered crushing defeats by the Japanese in the Pacific. Over the course of his three-year quest to find his family, Pappy became the renegade who changed all that. With a brace of pistols and small band of loyal fol,lowers, he robbed supply dumps, stole aircraft, invented new weapons, and modified bombers to hit harder, fly farther, and deliver more destruction than anything yet seen in the air. When Pappy’s modified planes were finally unleashed during the Battle of the Bismarck Sea, the United States scored one of the most decisive victories of World War II.

Taking readers from the blistering skies of the Pacific to the jungles of New Guinea and the Philippines to one of the the war’s most notorious prison camps, Indestructible traces one man’s bare-knuckle journey to free the people he loved and the aerial revolution he sparked that continues to resonate across America’s modern battlefields.

I loved Indestructible. It is a personal story that drew me into routing for the characters to make it and get back together. It also touched so much on how hard it was Australia and in Japan’s concentration camps that many were forced into living in.

I found Pappy Gunn’s story to be different than a normal soldiers view of the war as Pappy Gunn worked behind the scenes. The story also sets up with some of his past in a well written way that it made me glad and supportive of what Gunn was doing. Bruning also follows Gunn’s family, who I was attached so especially since both were thinking of the other.

This was a pretty clean book. It does have war scene. It well written, very thick, and well worth your time, especially if you love World War II stories.