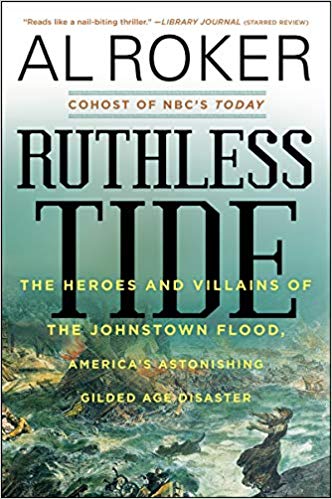 Author: Al Roker
Genre(s): American  History  Nonfiction
Buy the Book Buy the eBook
We are a participant in the Amazon Services LLC Associates Program, an affiliate advertising program designed to provide a means for us to earn fees by linking to Amazon.com and affiliated sites.
Skip to the book review
Publisher Summary:

Central Pennsylvania, May 31, 1889: After a deluge of rain—nearly a foot in less than twenty-four hours—swelled the Little Conemaugh River, panicked engineers watched helplessly as swiftly rising waters threatened to breach the South Fork dam, built to create a private lake for a fishing and hunting club that counted among its members Andrew Mellon, Henry Clay Frick, and Andrew Carnegie. Though the engineers telegraphed neighboring towns on this last morning in May warning of the impending danger, residents—factory workers and their families—remained in their homes, having grown used to false alarms.

At 3:10 P.M., the dam gave way, releasing 20 million tons of water. Gathering speed as it flowed southwest, the deluge wiped out nearly everything in its path and picked up debris—trees, houses, animals—before reaching Johnstown, a vibrant steel town fourteen miles downstream. Traveling 40 miles an hour, with swells as high as 60 feet, the deadly floodwaters razed the mill town—home to 20,000 people—in minutes. The Great Flood, as it would come to be called, remains the deadliest in US history, killing more than 2,200 people and causing $17 million in damage.

In Ruthless Tide, Al Roker follows an unforgettable cast of characters whose fates converged because of that tragic day, including John Parke, the engineer whose heroic efforts failed to save the dam; the robber barons whose fancy sport fishing resort was responsible for modifications that weakened the dam; and Clara Barton, the founder of the American Red Cross, who spent five months in Johnstown leading one of the first organized disaster relief efforts in the United States. Weaving together their stories and those of many ordinary citizens whose lives were forever altered by the event, Ruthless Tide is testament to the power of the human spirit in times of tragedy and also a timely warning about the dangers of greed, inequality, neglected infrastructure, and the ferocious, uncontrollable power of nature.

I am so glad I read Ruthless Tide by Al Roker. I knew nothing about this flood that happened in Pennsylvania in the late 1800’s. It is a part of history that I should have known about but didn’t. I don’t remember learning about this historic flood or the part that the Gilded Age of American played in it.

I picked up this book for my nonfiction books for every state challenge and loved it. I did some research after reading this book and realized that quite a few books have been written on this flood, and I am going to add a couple of them to my to read list. I think Al Roker did a good job with writing this book, but I am guessing that he relied heavily on the previous books that have been written.

I liked the fact that this book was not super long or overly detailed. It covered a good amount of information and the author kept it interesting. I think this would be a good book for a high school student to read because it is an event that a lot of the younger generation knows nothing about.