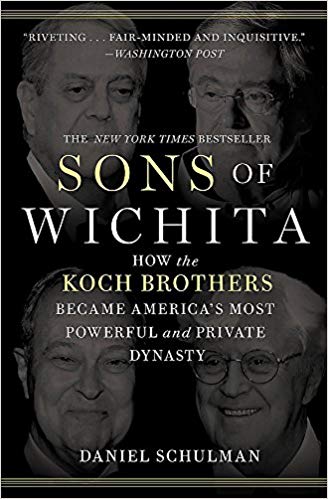 Book Review of
Sons of Wichita

Author: Daniel Schulman
Genre(s): Biographies  Business and Time Management  Nonfiction
Buy the Book Buy the eBook
We are a participant in the Amazon Services LLC Associates Program, an affiliate advertising program designed to provide a means for us to earn fees by linking to Amazon.com and affiliated sites.
Skip to the book review
Publisher Summary:

Not long after the death of his father, Charles Koch, then in his early 30s, discovered a letter the family patriarch had written to his sons. “You will receive what now seems to be a large sum of money,” Fred Koch cautioned. “It may either be a blessing or a curse.”

Fred’s legacy would become a blessing and a curse to his four sons — Frederick, Charles, and fraternal twins David and Bill — who in the ensuing decades fought bitterly over their birthright, the oil and cattle-ranching empire their father left behind in 1967. Against a backdrop of scorched-earth legal skirmishes, Charles and David built Koch Industries into one of the largest private corporations in the world-bigger than Boeing and Disney — and rose to become two of the wealthiest men on the planet.

Influenced by the sentiments of their father, who was present at the birth of the John Birch Society, Charles and David spent decades trying to remake the American political landscape and mainline their libertarian views into the national bloodstream. Before the death of David in August 2019, the two brothers together controlled a machine that is a center of gravity within the Republican Party. To their supporters, they were liberating America from the scourge of Big Government. To their detractors, they were political “contract killers,” as David Axelrod, President Barack Obama’s chief strategist, put it during the 2012 campaign.

Bill, meanwhile, built a multi-billion dollar energy empire all his own, and earned notoriety as an America’s Cup-winning yachtsman, a flamboyant playboy, and as a litigious collector of fine wine and Western memorabilia. Frederick lived an intensely private life as an arts patron, refurbishing a series of historic homes and estates.

Sons of Wichita traces the complicated lives and legacies of these four tycoons, as well as their business, social, and political ambitions. No matter where you fall on the ideological spectrum, the Kochs are one of the most influential dynasties of our era, but so little is publicly known about this family, their origins, how they made their money, and how they lived their lives. Based on hundreds of interviews with friends, relatives, business associates, and many others, Sons of Wichita is the first major biography about this wealthy and powerful family — warts and all.

Sons of Wichita by Daniel Schulman is a book I do not think I would have picked up if I hadn’t challenged myself to read a nonfiction book for every state. Reading often stretches you outside your comfort zone. It takes you places you may never have gone if you hadn’t read a certain book.

I love business books. I love a good story about a family or person, but Sons of Wichita isn’t my normal type of business book. At over 400 pages, it is a large book full of facts and insight into the lives of the Koch brothers. I needed a book for Kansas, and the Koch family is from Kansas, and their business was built in Kansas. I thought it might be a good Kansas book, and the fact that it has a lot of five star ratings on Amazon, made me decide to give it a try.

Before reading this book, I knew very little about the Koch brothers, except what I had heard on the news during the 2008 and 2012 Presidential elections. As I read this book, I couldn’t believe how long the Koch family had actually been involved in politics. I also didn’t really know much about their business or family life.

Many of the reviews on Amazon stated that this book was fairly balanced and presented the facts of the family. I agree with that. It was much more balanced than I thought it would be. No matter what side you are on, you won’t agree with everything in this book, but if you love a good business story or the facts behind politics, I think you will enjoy this one.

The book shares the good and the bad. It shares that family members can and often do get nasty with each other. It shares the story of hard work, and it also shares the power of giving to others. And it shares how many often influences politics, both in good and bad ways.

This book was not a riveting read, but I am so glad that I read it. I learned so much about politics and the Koch family that I had no idea about.