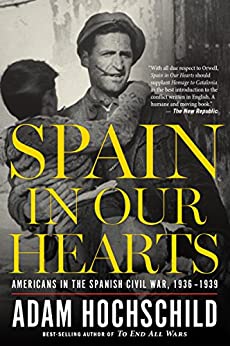 Book Review of
Spain in Our Hearts

Author: Adam Hoshschild
Genre(s): History  Nonfiction
Buy the Book Buy the eBook
We are a participant in the Amazon Services LLC Associates Program, an affiliate advertising program designed to provide a means for us to earn fees by linking to Amazon.com and affiliated sites.
Skip to the book review
Publisher Summary:

For three crucial years in the 1930s, the Spanish Civil War dominated headlines in America and around the world, as volunteers flooded to Spain to help its democratic government fight off a fascist uprising led by Francisco Franco and aided by Hitler and Mussolini. Today we’re accustomed to remembering the war through Hemingway’s For Whom the Bell Tolls and Robert Capa’s photographs. But Adam Hochschild has discovered some less familiar yet far more compelling characters who reveal the full tragedy and importance of the war: a fiery nineteen-year-old Kentucky woman who went to wartime Spain on her honeymoon, a Swarthmore College senior who was the first American casualty in the battle for Madrid, a pair of fiercely partisan, rivalrous New York Times reporters who covered the war from opposites sides, and a swashbuckling Texas oilman with Nazi sympathies who sold Franco almost all his oil — at reduced prices, and on credit.

It was in many ways the opening battle of World War II, and we still have much to learn from it. Spain in Our Hearts is Adam Hochschild at his very best.

I loved Spain in Our Hearts. I knew some about the Spanish Revolution in Europe because it ties in with World War II history. I also learned about it in world history, but this was the first stand alone book I had read.

The author does an amazing job of writing. It is long and full of details, but I loved that. I also loved that it ties in people from American history. I found out about authors like George Orwell and how this effected him.

It was also covered how it effected American and how the Depression may have changed it.

It is long. I did not mind the length too much as I read it over winter break. I also read a lot of it while waiting in the doctors office. Having the distraction of lots of facts was great. I also loved the descriptions from those of the battles. It was so horrific, but also something that needs to be known.

If you have not read anything about the Spanish Revolution from the 1930’s, you should read Spain In Our Hearts.