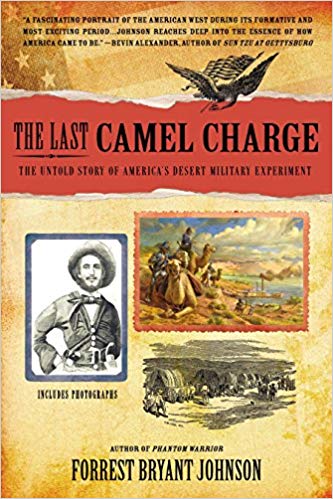 Author: Forrest Johnson
Genre(s): American  History  Nonfiction
Buy the Book Buy the eBook
We are a participant in the Amazon Services LLC Associates Program, an affiliate advertising program designed to provide a means for us to earn fees by linking to Amazon.com and affiliated sites.
Skip to the book review
Publisher Summary:

In the mid-nineteenth century, the U.S. Army was on the verge of employing a weapon that had never before been seen on its native soil: a cavalry mount that would fare better than both mules and horses in the American Southwest…

Against the Mojave in the Arizona Territory, against the Mormons in Utah Territory, during the early stages of the Civil War, the camel would become part of military history and a nearly forgotten chapter of Americana.

This is the true story of that experiment and the extraordinary group of people who it brought together. The Last Camel Charge gives them their due as a vital piece of American history.

The Last Camel Charge is an interesting read if you like unusual history facts.

I read a thing in one of my history classes about how the US government once brought camels to the US to try and use in the army. I was interested, then I became even more interested once a western movie I was watching had a camel in it that was owned by the US government. This led me to pick up The Last Camel Charge at a used book store as it is the full story behind the camels brought the US.

This a cool and sad story. The cool part is the camels, how people acted, the people who wanted the camels in the US, and how the US government got them here. The sad part is in the truth that this book tells about what happened to the camels and the west. It also brings in how the US government and Mormons were disagreeing during that time as that was the only time camels were prominently used.

I think that this story should be read. I am not sure that this was the best book, but it was honest and blunt, which I liked. I also liked the camel stories. There were a couple interesting ones in there like the last living camel that survived in Texas for a long.