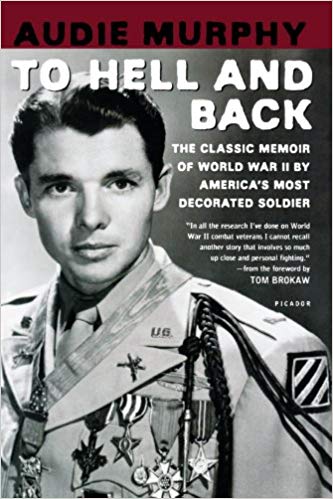 Book Review of
To Hell and Back

Author: Audi Murphy
Genre(s): Biographies  Biographies & Memoirs  History  Nonfiction  WWII
Buy the Book Buy the eBook
We are a participant in the Amazon Services LLC Associates Program, an affiliate advertising program designed to provide a means for us to earn fees by linking to Amazon.com and affiliated sites.
Skip to the book review
Publisher Summary:

Originally published in 1949, To Hell and Back was a smash bestseller for fourteen weeks and later became a major motion picture starring Audie Murphy as himself. More than fifty years later, this classic wartime memoir is just as gripping as it was then.

Desperate to see action but rejected by both the marines and paratroopers because he was too short, Murphy eventually found a home with the infantry. He fought through campaigns in Sicily, Italy, France, and Germany. Although still under twenty-one years old on V-E Day, he was credited with having killed, captured, or wounded 240 Germans. He emerged from the war as America’s most decorated soldier, having received twenty-one medals, including our highest military decoration, the Congressional Medal of Honor. To Hell and Back is a powerfully real portrayal of American GI’s at war.

To Hell and Back by Audi Murphy is a classic World War II memoir of America’s most decorated soldier, and it has taken me too long to read it. I used to watch Audie Murphy’s movies when I was younger. I enjoyed them even though they are a little cheesy. My great great uncle who fought in World War II still loves Audie Murphy. He will watch his movies anytime he sees them on because my uncle Johnny loves the sacrifice and service that this eventually Hollywood star gave.

I enjoyed this book. It was riveting, well written. I felt at times there were some details missing. There were also a ton of people, so at times, I had trouble keeping them straight. I can see why this was loved at the time because it was written in first hand perspective and brought the reader into the war, which was good but also showed the pain of war.

To caution though, it is a war book. It does not hold back on a lot of details. There also is a good dose of language, which surprised me a little just because of Murphy’s movies. There also was a little thing about women in war, but that wasn’t too bad.

If you are looking into reading this, you should pick it up. I just recommend that you wait to read it if you haven’t read any other World War II memoirs. This is just because it is a little old fashioned wording, some details are missing, and it can be harsh at times.