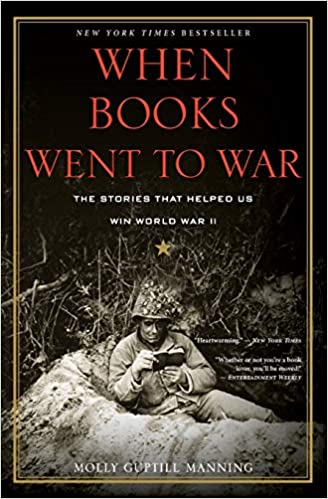 Book Review of
When Books Went To War

Author: Molly Guptill
Genre(s): History  Nonfiction  WWII
Buy the Book Buy the eBook
We are a participant in the Amazon Services LLC Associates Program, an affiliate advertising program designed to provide a means for us to earn fees by linking to Amazon.com and affiliated sites.
Skip to the book review
Publisher Summary:

When America entered World War II in 1941, we faced an enemy that had banned and burned 100 million books. Outraged librarians launched a campaign to send free books to American troops and gathered 20 million hardcover donations. In 1943, the War Department and the publishing industry stepped in with an extraordinary program: 120 million small, lightweight paperbacks for troops to carry in their pockets and rucksacks in every theater of war. These Armed Services Editions were beloved by the troops and are still fondly remembered today. Soldiers read them while waiting to land at Normandy, in hellish trenches in the midst of battles in the Pacific, in field hospitals, and on long bombing flights. They helped rescue The Great Gatsby from obscurity and made Betty Smith, author of A Tree Grows in Brooklyn, into a national icon. When Books Went to War is the inspiring story of the Armed Services Editions, and a treasure for history buffs and book lovers alike.

When Books Went To War shares the little-known history of the U.S. sending books to the military during WWII.

It is estimated that Hitler banned and burned 100 million books. The U.S. did the exact opposite. U.S. librarians started a campaign to send millions of books to those serving in the military during the war. The publishing industry and the war department ended up sending 120 million books to U.S. troops.

I have read a lot of WWII books, but I had no idea about this part of WWII. Books and reading gave those fighting during the war comfort. It reminded them of home. It gave them a brief break from the chaos that surrounded them. For those recovering in hospitals, it was a way to pass the time.

The small paperbacks specially published for the military were easy to carry no matter where they went. It allowed them to always have a book with them.