What I Read in July {Grace}

Blog, What Grace is Reading, What We Are Reading 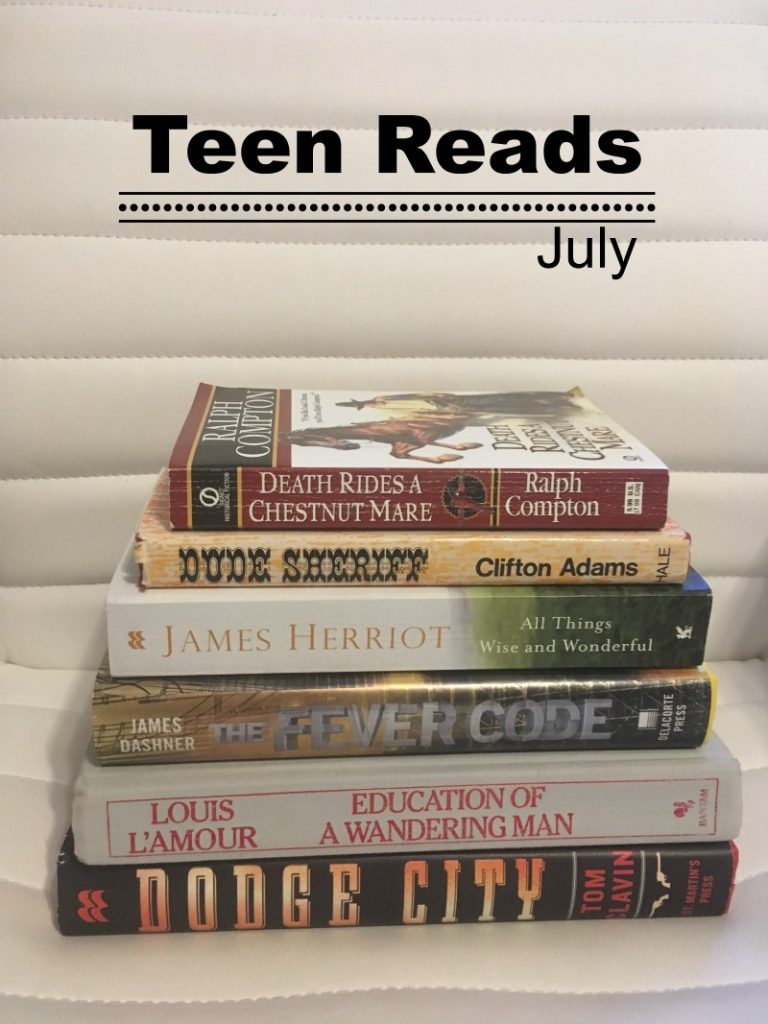 I had a very productive month of reading in July. I got a total of thirteen books read, but most of them were fiction. I believe the summer mood has me into reading fun books instead of nonfiction.

The Scorch Trials, The Death Cure, The Kill Order, and The Fever Code: I enjoyed all four of these books. I ate up all five books in this series and finished four of them this month. These are great sci-fi books at least in my eyes and I highly recommend them to anyone who enjoys dooms day sci-fi. I enjoyed the characters and there difficult situations which made me think and contemplate what I would do in their situation.

Riders of the Purple Sage: This is a good Zane Grey western. It wasn’t a stellar book and I was a bit disappointed in the ending. But overall, it had a good plot and some great descriptions of the old west.

Education of a Wandering Man: I really enjoyed this nonfiction book. I love reading L’amour books, so I was excited to read about his younger years from his eyes. There were also a ton of books that L’amour talked about reading and about thirty of them ended up on my want to get list. If you love memoirs and the old west, this book is right up your alley.

All Things Wise and Wonderful: This book jumps around way to much for my taste. Overall it was good, but it was choppy and seemed to be a bit disorganized. I believe it would have been better if Herriot had just focused on one part of his past instead of jumping from war time to his previous time as a vet. There were a lot of funny stories that I did enjoy though.

Nevada: I liked this Zane Grey. I could see where the plot was going except there were a few small surprises thrown in. I liked the characters especially Nevada, but he goes by a different name which carries into the plot

Death Rides a Chestnut Mare: This book definitely kept me reading. I enjoyed the main character Daniella also known as Daniel for she is actually a girl disguised as a boy hunting out her father’s killers in the old west. Of course, her being a girl dressed as a boy brings on some awkward moments. There are some mentions of things about women, men, and comments about people being naked, which makes this more of a late teen or adult western.

Dude Sheriff: I was little disappointed when I started this book. I read what I thought was the description and decided it sounded interesting, but unfortunately the description on the back of the book was promoting another book. It ended up that the description for the book was inside the book. This book was good, but I found the plot a little boring and predictable. It was a good easy read which was what I needed. This book is really old though and my copy came from my grandpa. The only way I could find it now was used.

Maverick: If haven’t already noticed, I was in a western mood this month and this book went along with the theme. I loved how this book was written which was from the eyes of a gambler who has very little humility and is always in trouble. The plot is average for a western, but there is a lot of trickery and deception in the book which kept it somewhat interesting.

Dodge City: This was a good book about the west. It had a lot of information about characters who were known in the old west. It is interesting in that it made me think about how it was truly like in the old west. Not quiet like the fictitious books like to put it as. It also discusses how the man has changed so little in whether it’s about whiskey, woman, gambling, or violence.

What I Read in June {Grace}

What I Read In July {Lynn}